TRIO the dog, and the mysteries of English slang !

This description of our current Welsh Collie by my 17 year old son is spot on!

Trio is a lovely dog, but much more of a handful than our previous gentle soul, Blaze, who passed away last year.

An adolescent male at one year old, Trio is your classic teen male, typical of their kind
whatever the species; funny, but sometimes inappropriate; fun, but often too loud; loving, but
can be a stranger; emotionally irregular with decidedly moody intervals!  (Apologies to those
of you with daughters; I only have boys to comment on!)

I was talking with a friend recently about the language of teens, used by my 17 year old in particular.  Sometimes it seems like a foreign language, but his choice of words and turn-of- phrase provides me with many, many moments of amusement!

It reminds me of my own favourite words from my own teenage youth when everything was ace or lush – (howls of laughter coming from the son’s corner at these ‘old person’ words!)
Of course, although they leave mums and dads et al quite literally lost for words, these generational changes are part of language development worldwide.  Take for example the
writings of Chaucer or Shakespeare from a couple of hundred years ago; a 21st Century
audience needs translations by Middle English experts, just as we might need translations
from French or German to English so that we can understand it.

My son’s influences are a little less classic and a lot more urban-global; music, internet,
global on-demand tv, mobile phones, playstations, X-Box…and so on.
He loves rap, the more attitude the better; he skateboards like a pro, which has its own
‘scene’ in its own right; he is fiercely anti-racism and pro-environmental protection, and
moves with a great group of friends he has grown up with.

Since he was very small, he has always, undoubtedly, been one of the ‘cool’ ones.

In years to come, when my son is reflecting on his own teenage children’s language, there
will no doubt be a whole new dictionary of ‘teen-speak’ to baffle him, as it baffles me now.
As for Trio, well, maybe, just maybe, we will one day succeed in ‘debugging’ him! 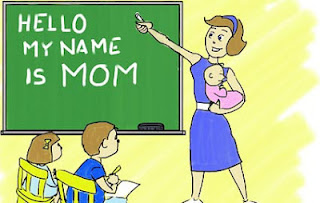